With a son who is a structural engineer working for a firm designing bridges, whenever I see a news story about a bridge collapse, it catches my eye. There is one such account in the news today about a bridge section that fell into a river yesterday in Washington State – north of Seattle. A truck accident caused the failure, which involved a couple of vehicles unable to stop and thereby plunging into the stream.

The bridge was not classified as structurally deficient, but a Federal Highway Administration database listed it as being “functionally obsolete” — a category meaning that the design is outdated … The bridge was built in 1955 and has a sufficiency rating of 57.4 out of 100, according to federal records. That is well below the statewide average rating of 80 … but 759 bridges in the state have a lower sufficiency score.

Hey, I take offense to this since I was also “built” in 1955!  Well, I guess I should take some encouragement from this, because, like the bridge, though I’m not currently rated as “structurally deficient” (meaning “dead”), I guess my horribly aching knees acknowledge that I am “structurally obsolete.”  That is a sanitary engineer-esque way of saying you’re “getting old and out of date.”

And like the bridge, which will have the broken section replaced with some artificial structure, I guess that is what awaits my knees … ugh!

One thing for sure, my bridge engineer son will never be without a job … nor will any orthopedic surgeon doing knee replacements. But when you think about it, they actually are both structural engineers.

During our recent trip to Europe, it was a most interesting experience to visit with a church group that our son Jesse had become acquainted over his semester in France. It was truly a fantastic bunch of people. Jesse took the bold step of seeking out this church group through a contact from our (Tri-State Fellowship) French friends Tsiry and Barbara Andria.

The church is made up of about 100-125 people who meet in a facility that is located in a sort of shopping mall setting – like a strip mall of parallel rows. We went to a Saturday evening fellowship dinner that was an outreach event, having the specific goal of church people inviting their friends to hear a program consisting of several sketches, videos, and a message. I was able to understand and recall enough of my high school and college French to catch the basic idea of the program. They talked about how the world faces political and economic crises, but that the spiritual crisis faced by sin is actually a bigger problem – that though empires and great leaders have come and gone, only a relationship with Christ can fix the real problem faced by everyone. It was excellent. 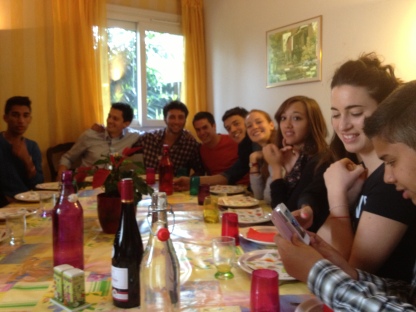 On Sunday afternoon we attended a luncheon featuring a gathering of the young adults of the church at the home of a truly delightful college girl. Her parents prepared the meal, replete with course after course of appetizers, portions of the meal, and several rounds of desserts. So there were four “old people” there between the hosts and Diana and me … along with 16 young adults ranging in age from a couple of high school students through those in their mid 20s. It was a very, very sharp group of folks – as this area of France is essentially in what is the “Silicon Valley” equivalent to California.

The mother of the girl hosting the gathering spoke English quite well, as did a number of the young adults. All together, this group really helped Jesse with his French speaking skills – as the classes at the University Jesse attended were taught in English, so he was not getting more proficient through that.

One of the men of the church that I had met on Saturday evening – a fellow with both a French and American background – told me that the history of the church was “Brethren.”  I immediately presumed it was not any sort of Brethren that we may know of in the Tri-State area, but rather a group with British connections known as “Plymouth Brethren” … with a most prominent name of John Nelson Darby – sometimes also known as Darbyism. This was very interesting to me for a variety of reasons. Though there is no direct line or connection, many of the thoughts of Darby were further defined (I would say more accurately) by C.I. Scofield (of the famous Scofield Reference Bible and founder of my college) and popularized by the many well-known teachers associated with Dallas Theological Seminary. (The theological system is known as dispensationalism, and was much the foundation of my family’s faith system and love of Scripture.) Beyond that, Darbyists and Plymouth Brethren were known for the distinct views of shared/plural eldership and open meetings – for open sharing and teaching of Scripture. The former of these has always been a core value of TSF, while the latter was also to some extent in the early years when the church was small enough for this to be practical. This entire discussion with our hosts – filled with lots of translations by the more bilingual of the group – was very much of interest and engagement by a number of the young adults. It did not “blow over their heads.”

What I believe I saw in this church was the future of the effective church in America. We are, by all visible indicators, headed toward a totally secular, post-Christian, pluralistic society such as is in place today in France. But here in Antibes, France … on the Cote d’Azur (the French Riviera) is a group of Christians who are jointly members of a rather suspect minority in the culture. They are doing life together, almost in a 1st Century sort of way. There is a felt need for dependence and inter-dependence. The fact is that we all have the same need even in America, but we just don’t yet feel it quite so keenly. This church was a multiple generation church; and I continue to believe that this is the most successful model for true church growth that will be measured in terms of faithfulness and depth of ministry, rather than in numbers of people and flash and pizzazz. This sort of church takes work and personal and intentional commitment – probably well beyond what most of us are actively experiencing and living in terms of a covenant community relationship with one another. It is increasingly my conviction that we must do this or be essentially flushed by the coarsening culture. 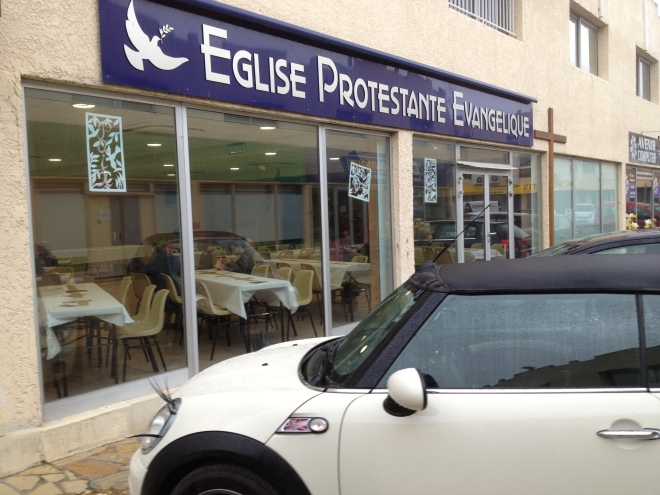