I have, at various times of my life, either been set upon pedestals as a ministry star, or abandoned as a flop and failure—pretty much while being the same person and doing the same things. Within a span of five minutes, I’ve been told by two different people that I am an amazing and anointed communicator, but then also that I’m such a bore that I seem to be putting myself to sleep while speaking.

Never wanting to displease anyone, I’ve too often not concerned myself enough with being centered rather upon pleasing The One who really counts.

The task of pastoring is impossible. It is crazy to try to please people, because it cannot be done in a diverse community. Truth is, I’m not as good as those fans who’ve come and gone believed me to be, and a great number of the criticisms are indeed unfairly leveled by people with small lives and even smaller perspectives.

Many people are too easily enchanted by a stage. Christians—ministers even—are no exception. Sometimes we elevate our leaders like Moses lifted up the snake in the wilderness … as something to pin our hopes to … something to heal us, because we sense, somehow, that we are sick and need saving. Humans desire something to look to vicariously because we are desperate for something of God that we can barely articulate … something up there.

So, we take the beautiful, the talented, the fortunate from among us and lift them up on a stage. We fawn over them. Feed them. Praise them. Buy and sell their books, or books written in their name. We applaud their sermons skillfully delivered with content provided from a nameless someone from afar.

But the celebrities disappoint, and they will always disappoint. Unlike Moses’ bronze snake (or the Lifted One that it prefigured) we do not find healing for our ills in gazing upon our elevated leaders – the Moses people of our age – but only by seeing the Snake.

The voice behind the microphone and the voice that says “amen” in the pew are not so different. The minister at the lush mega-church with a staff of many dozens and the lone pastor in a spindly rural church are far more similar than they are different.

Or at least they ought to be. Both can be voices of wisdom, servants of biblical words and truth to lost and ornery sheep. Neither can save those that gaze upon them.

Because, you see, the Lifted One erodes the heights and valleys of our elevations. Only in elevating him will we see ourselves and others as we are, finding the life we seek in the desert.

So, after years of hating and dissing snakes and even having a snake category on this blog, I have to admit that there is a good Snake – the bronze one from the desert and the person it prefigured.

(Disclosure – I have edited and expanded upon a shorter piece from Leadership Journal in writing this.)

Most of my blog writing energies have lately gone into my other sites for which I contribute quite a lot of material. There are few people who write more than I do, and even my mega-writing associate pastor – who can throw words on a page faster than anyone I’ve ever known – has found that his many writing demands have doomed his own personal blog in recent months.

I like writing so much that I could almost enjoy doing it simply for my own enjoyment – a sort of journaling that likely no other person will ever read. There is some measure of this that I do in the realms of spiritual disciplines and in the act of the organization of personal thoughts and even frustrations and anger (dare I confide?). Yet when one puts something out there for the world to see, one hopes there are some people who indeed read it and find it either enjoyable or informative.

For those who have never done this sort of thing, there are ways of seeing how many people actually look at what you post. I am almost always surprised by some of what I observe in blog statistics – either high or low numbers … as well as people who sign up to regularly get blog posts. Particularly with this blog that often features theologically evangelical themes, many of those who register when I have a post that is simply something humorous in my world, must really wonder what in the world they are reading when I go gospel on them.

My Civil War blog (EnfiladingLines.com) actually has grown to have a fairly large following and is picked up and repeated in a variety of other places. My Orioles network blog is probably read by several hundred people whenever I write something.

But the biggest chunk of writing currently is going toward supplemental resources for our Sunday teaching series – daily posts that go along with the weekly theme and a Scripture reading program. There were 40 of them with a recently ended series (ReviveTSF.org) and there are going to be a total of 30 with the newly-initiated series (CrossWordsTSF.org). On the one hand, I am very blessed and encouraged by people near and far who read them and have made comment to me that it has enriched them – like hearing this week from a guy who is a pitching coach in the Orioles organization and is reading them from Florida. But on the other hand, though many more people in the church are involved this time than previously, still it would appear that a significant percentage of folks simply have no interest in giving time to such a supplemental resource. I am truly baffled by that. I think this has some illustration about horses and water and what they will or won’t drink – if you know what I’m getting at.

Though not the biggest thing, one thought that encourages me to write on is that perhaps grandkids (or beyond), who I will likely never really know, may someday in curiosity read what this old guy had to say, and maybe they’ll be helped by something. I would certainly love to read what ancestors wrote about anything … but maybe as with liking to write, this too is an area where I am entirely out of step with the rest of the world.

OK… that’s enough introspection for a while.

So … 4 days in Texas, 4 BBQ dinners! First was Dickey’s in Richardson with my niece and her husband on Saturday night; next was Spring Creek Barbeque in Dallas with the Texas family for Sunday lunch; yesterday was a welcome luncheon of the same at the host church for my conference; and finally tonight at Rudy’s Barbeque in Austin with two of my pals – Guy Kneebone from Urbana (yes, from Maryland), and Joel Sutton from Minneapolis.

Here are some pictures from tonight. The place has a lot of interesting signs and hangings on the wall (very Texan-like), and they had a ribs-eating contest while we were there (though we did not participate). 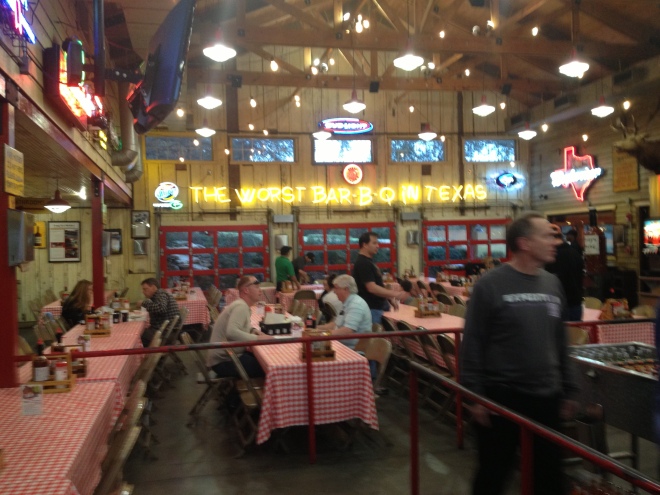 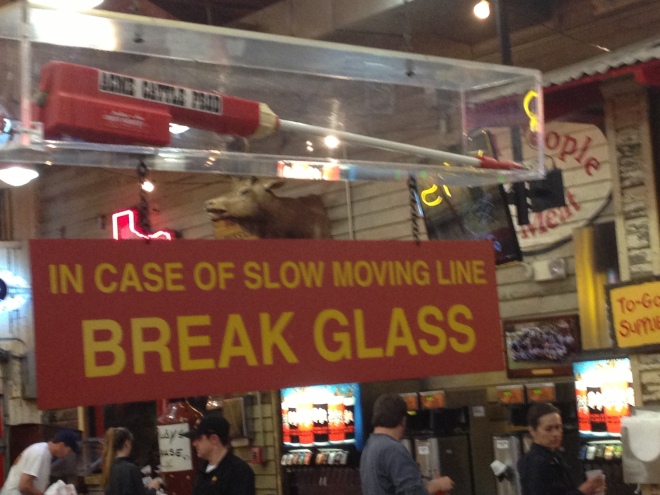 Back about two months ago you may recall that a new dog came to live with us. It was not the kind of dog you would expect in the Buchman house. We have a Jack Russell – which makes sense – a hyper running dog fits our house! But, a foofy, prissy, little yapper, with long hair and a puffy tail??  Not my kind… but we took it in since it was apparently lost. The dog was fairly well-behaved and not much of a problem.

We never settled on a name, so maybe that is something that offended the little beast? But, it is now gone.

One day last week, the dog was outside in our large yard, sniffing around and chasing mice or whatever out at that back edge of the yard. She had done this many times. Our other dog was there as well … but after a time, the little dog was gone and seen no more.

This has happened a couple of other times over the years. I remember once in Texas when a similar little dog stayed with us for a while, and one evening just ran out the front door. I called to it, and it just kept right on going! It looked back once as if to say, “Thanks buddy for the kindness!”

I have to say that this all reminds me of too many folks I’ve known over the years in church ministry. They are kinda lost in life, come into the church for a time, get some love and shelter and renovation … and then a day comes when you look up and can’t see them anymore! Without announcement, they’re just gone from sight. I’ll never understand it.

Hi there everyone! And welcome to my newest blog – The Word of Randy.

I know that it sounds a bit … ah … over the top?? A bit too grandiose? Yep, I agree. But it was the best I could come up with. Actually, I had quite a number of other more mundane sounding names about simple concepts of writing and communicating … but all those names were taken!

Actually, I’ve been blogging for quite a few years – first of all on my church web page, and then, as a sort of sports writing blog focused on the Baltimore Orioles.

I am the Lead Pastor of a church in Hagerstown, Maryland called Tri-State Fellowship. The majority of my postings will be written from this perspective and with that in mind. For those who might read this from outside this church family, Tri-State Fellowship in a congregation of about 500-some attenders on a Sunday – affiliated with the Evangelical Free Church of America denomination.

Some posts will be only sensible by knowing some inside details about the church and its people and programs. Others will be of general interest and value to any from a Christian perspective. And more than a few will be just plain goofy and done for the fun of it.

As I write this in mid December of 2011, I anticipate my church to have a serious web page upgrade in January. This is really overdue and has been in progress for a while. Our current page is now rather ancient looking, but has lots of church information … it can be found at http://www.tristatefellowship.org.

The truth of the matter is that I’d probably rather write than do just about anything in life. I’ve often said that my blog is a place to put all my extra words (and opinions – of which I’ve many!).

A blog is a conversation … and yes, this format on WordPress makes it possible for you to easily communicate back with me – and I welcome that! Think of the blog as a way we can sit on the front porch of life, watch the world going by, and talk about it as friends.