As I sit here and write this on a late Saturday afternoon, my middle son Aaron has arrived and is working with his guitar and chord charts – practicing for a gig tonight as Fratelli’s Restaurant. He is playing and singing there with his old high school pal Rhet Troxell. Most of my boys have done this sort of thing from time to time.

I wrote on Facebook that Aaron is performing there and invited everyone – which in my case is 680 “friends.”  He seemed to be struggling through the chord progression on a song, so I asked him how many songs they had ready, and he said, “Not enough!” So I answered, “So, I just invited 680 people, and now you’re gonna screw up!”  (He’ll be fine!)

Anyhow, the moment created a flashback for me. When I was quite young (like 14 or 15) and began singing solos in music programs and for specials at church, my mother – a fair musician herself – was so nervous she looked like she was going to just die any moment. Her lips were pursed, her brow furrowed, and her eyes were wide with fear. I learned QUICKLY that I should never look at her! It was as if she was communicating, “If you mess up, I’m gonna just crawl under the seats and hide!”  It was not encouraging.

I’m pretty sure I never did that with my boys and their musical endeavors, but I probably did with their running! But, a difference is that with running in cross country or track, I could scream and yell at them – unlike my mother, who had to suffer in silence. (She didn’t really suffer; she was the one who pushed me into that stuff, whether I wanted to or not.)

Any of you who have had more than one child know that they are never alike. Each is individual and endowed with certain talents and personality mixes. Though familial things may be seen – like music skills or running abilities – we need to remember they are all unique, and our encouragements need to be individualized as well.

That famous verse in Proverbs (which is not a promise, but rather a word of wisdom) should have the following emphasis to catch the original sense of it – “Train up a child in the way HE should go, and when he is old, he will not depart from it.” The encouragement here is to be a wise parent who looks to see what are the unique gifts, bents, and paths a child should pursue.

Haha… as I’m writing, Aaron is singing some song I don’t know (which is most all pop songs to be truthful) and Jesse comes running downstairs and says, “What are you doing singing that?  Is Kelly Garber going to be at this thing?”  And Aaron answers, “Yes, she is, so I’ll have to sing at least one Bon Jovi song!”

Well, I’m heading out to hear him. I’m going to post this now, but I’ll edit it later with a picture or two. 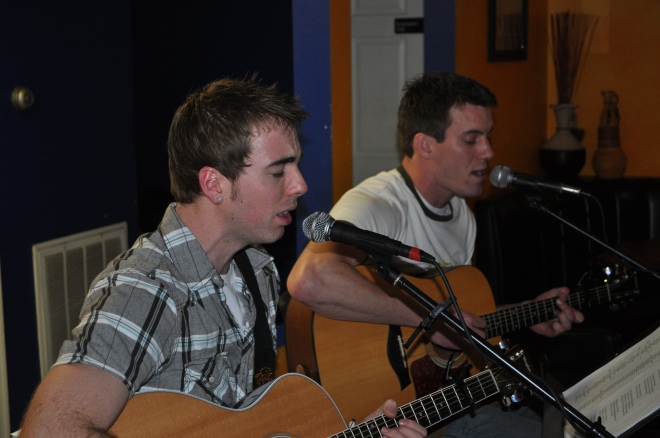