Mitt Romney was in nearby Greencastle, PA on Sunday evening for a campaign event hosted by the Franklin County Republican Party. (For those of you who read this from outside this area, Greencastle is about 20 miles north of where I live – just over the Mason-Dixon Line into PA.) 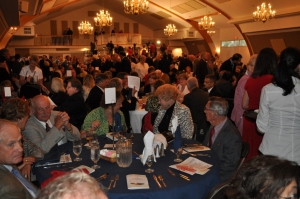 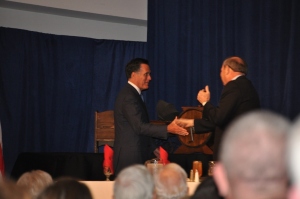 Diana and Jesse and I went to the dinner, having gotten tickets through the Washington County Republican Central Committee – where I am one of 9 members. I had great fun by posting on my Facebook status line: “Headed out to dinner with Mitt Romney and a few friends…”

OK… there were 600 friends there! And, we were seated back from the front in the third row of about 15 rows of tables!  (This is when you know you’ve arrived!…. or, maybe just been fortunate for some reason.)

As always surrounding these events, the security was rather tight to say the least. There were a lot of big dudes just standing around “watching” everything.

So … people have been asking me if I’m a big Romney guy now. Well, not sure how big I am, but it has grown on me. He certainly hit ALL of the right themes in his speech, and if he can be taken at his word and he is able to accomplish a number of these initiatives, we are going to be better off as a country. I truly believe the country we will have if President Obama is re-elected is one we will not recognize … and will be one that is significantly more hostile to the Gospel message and Christianity within the culture. God will not be undone if that happens, and His grace and sufficiency will prevail for whatever contingencies ensue, but so long as we still have a democratic process, I am going to participate in it in a way that I believe best serves the God-ordained principles of American exceptionalism that also provide the best context for the Gospel. Toward that end, I am not concerned about Romney’s Mormon faith; I am concerned about Obama’s radicalism and connections to some of the most anti-Christian elements to be found in the world today.

I would have much preferred Paul Ryan of Wisconsin, though he did not run. It is my understanding that he is on the short list of those being considered for Vice President. I recently met some very fine evangelical folks from Wisconsin and from Ryan’s district – people who know him and those close to him – and they tell me he is truly squared away with an evangelical faith.

I put together a little video from Sunday night, and if you’d like to see it, here is the link:

I’ve read some local criticism of my committee and how, while the Franklin County folks are getting Karl Rove (2011) and Mitt Romney, we are featuring a defeated state senator (State Chairman Alex Mooney) and a relative unknown (a fellow who is a frontrunner for the next gubernatorial race). Well, we did have Representative Steve King of Iowa last year – a legit big dog in the House. But more than anything, Pennsylvania is a battleground state beyond what we are in Maryland, and Franklin County is seen as a pivotal area – hence the emphasis. I cannot explain that, but that is what is believed by Party activists who research these things.

Whatever, it was an interesting evening.

<As always with political narrative in this blog, I write to remind everyone and anyone that this blog is the opinion only of the author. It represents nothing of the viewpoint of Tri-State Fellowship – which takes no stand or viewpoint upon such matters. Furthermore, all costs associated with this blog are at the expense of the author without any connection to Tri-State Fellowship … not by registration costs or equipment costs, etc.  I have for many years bought my own computers and devices so as to be distanced from any connection.>