As I have written a couple of times in the past several months, I have been on a search for what is, to me, a lost father and family. The whole story of my background and why I have begun this search is written in my blog post on 6/20 … so I’ll not repeat it here, other than to say that I had been unable to find a single blood relative after months of searching.

I was able to discover through a lot of research that I surely, somewhere, have a “cousin” named William Parks – the son of the brother of the father I never knew. There have to be 10,000 people in the USA by this name. All I knew was his name and that he lived in Nazareth, PA in 1994. Several times I have called someone, believing through my research that I had found the lost cousin, only to find out it was not. 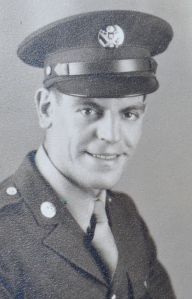 However, on Tuesday of last week I made a call and hit the right person. Amazing, and very emotional. In that he had no idea whatsoever that he had a cousin out there with my story, it was a total “out of the blue” phone call for him to receive. I knew this was going to be a very odd situation – one that anyone receiving such a call would greet with significant skepticism and suspicion. To his credit, he picked himself off the floor rather quickly and we had quite a conversation. He also called me back later in the day after it had sunk in a bit more, and after he dug out a box in the basement filled with old family mementos.

I was actually able through all I’ve discovered to tell him about certain points of the family past that he was unaware of – in terms of great-grandparents and where various ones lived and when. So we made plans to get together a few days later – which we did this past Friday.

So, I drove to the Wind Gap, PA area to meet with my 62-year-old cousin, whom just days earlier, had no idea he had such a relative … nor did I know if he was even still alive. It was a unique gathering. He showed me family history pictures and papers, gave me quite a few of them and various items he had from his Uncle David – my father, and filled me with stories that I could never have known in any other way. He was very close to my father.

We then drove down out of the Pocono Mountains to Easton, PA, and went from address to address of the places where the various family members had lived. My father actually lived in a house that I surely had driven by hundreds of times in my life, not knowing it belonged to him.

All in all, it was an incredible experience!! We clearly sensed a bond of family connection, in spite of our total separation prior to that day. And we clearly have lived different lives. I’ve gone the academic road through life, and Bill has taken the “hands-on” route that he described as “a liberal arts degree in life.”  He has truly done just about everything imaginable. I’ve often wondered why I am such a total mechanical ditz – well, now I know. He got all the mechanical genes!

There are two more cousins to find – if they can be. Bill has lost contact with them. I believe I’ve found one of them – living now in Florida – and have a message sent to her. But, it may well be that it hits her husband and her as so totally bizarre that they are afraid to respond!  I can understand that!

There is still much to learn and much that is unanswered. But I pick up a piece here and there; and if it can be found, I will find it.

People who hear this story are asking me how I “feel about it” … about a light now shining into this closet where no light has shown for 57 years. Truly, I think I’m still processing this. But let me say that it was never anything that I felt “angry” about, or even “wounded.”  It is more of a nothingness that now is something … and a residual undercurrent of weirdness that now has some explanation. Truly, my life has been extraordinarily blessed by God in the big picture of things – I’ve been granted grace upon grace. So there is no real loss to grieve in the context of all I’ve had.

But I do think this search is turning into one of the extraordinary events of my life.

One thought on “My Lost Family is Found”