Many years ago I heard James Dobson of “Focus on the Family” say that the #1 frustration of parents was the issue of sibling rivalry. I don’t know if that could be statistically proven, but I certainly remember it being an issue of strife in our family past. It particularly got my attention the day a hammer went flying through the air to hit one brother running away from another brother after a verbal altercation! 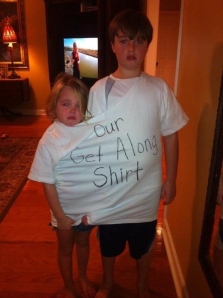 I have several times on Facebook seen the accompanying picture. Isn’t that priceless? Why didn’t Diana and I think of this? It would have either solved problems, or so complicated them that we would have had fewer mouths to feed!

A “get-along shirt” like this was pretty much what the Apostle Paul had in mind when he wrote about a couple of women in the church in Philippi. He says, “I plead with Euodia and I plead with Syntyche to be of the same mind in the Lord. Yes, and I ask you, my true companion, help these women since they have contended at my side in the cause of the gospel…”

These were not bad people; they were effective church workers and servants – commended by no less than the Apostle Paul!  But the benefit of their service was being very much marginalized by some inter-personal controversy surrounding them. It is likely that it also involved other people being put into a position of having to take sides with one or the other. Whatever – the end result was a church-wide distraction that simply did not need to be going on.

Again, I don’t know if it is indeed the #1 frustration of parents, but sibling rivalry and worthless dissention between siblings in the church family is just about the typical pastor’s #1 frustration. Lots of pastors would probably like to have the ability to put some people together inside the same shirt to make them get along! The issues are seldom of sufficient fire to account for the smoke accumulated. Would it not be so very much better to apply some other words of Paul on another occasion to another church:  May the God who gives endurance and encouragement give you the same attitude of mind toward each other that Christ Jesus had, so that with one mind and one voice you may glorify the God and Father of our Lord Jesus Christ. Accept one another, then, just as Christ accepted you, in order to bring praise to God.

The above portion of this writing is for next week’s church newsletter. The following will not be a part of that, but for a moment of fun, I will give a Sweet Frog gift card to the first person (not named Buchman) who answers correctly the following two questions about the hammer flying through the air:

a. Nathan at Ben

b. Ben at Nathan

i. Jesse at Ben

2.  The hammer hit the less-than-fully-innocent victim in the …